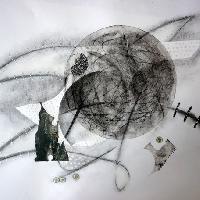 Elizabeth's website
Resume
From her early childhood until her mid thirties, Liz Hancock lived in what is now Zimbabwe where she began her artistic career in the mid 1970s.

Educated at the University College of Rhodesia (London) graduating in 1969.

Her early career involved participating in exhibitions organized by the National Gallery of Zimbabwe, and commissions for private and commercial clients..For his support and encouragement during this time, she is very much indebted to Christopher Till, who was then Director of the National Gallery of Zimbabwe, and now a major luminary in the South African art world. For a short time she also worked in advertising.

Since her return to Britain, as well as a period in teaching, the artist has exhibited regularly and ran her own gallery in Cheshire before relocating to Wales in 2002.

The stunning, atmospheric landscapes of mid- and West Wales are a major inspiration but the influence of the first half of her life spent in Africa has left an indelible mark. Her passion for "mark-making" began at the age of six, when exploring in the African bush with her parents, they came across some ancient cave paintings. The artist can still visualize those paintings, feel the textures of the hot granite rock, smell the dryness of the land, the simmering silence. She feels a reconnection with those images when she works, and finds it both magical and moving that this primal urge to express pictorially a response to the universe, lives on in her and all artists over the ages;


A networking group of 57 artists, living in and around Oswestry, UK